On October 3, 2020, with many volunteers help, we were able to plan several cherry trees at the Gillette Castle State Park.

In Japan, people visit the beautiful Cherry blossoms during the spring season, at parks, old castles, schools, or along the riverbanks. For them, it is the time to share the joy of living. In Connecticut, however, we only occasionally see these gorgeous Cherry blossoms on private properties, there is nowhere for the public to enjoy them.

In early 2018, Ms. Kandie Carle, Producing Artistic Director of the East Haddam Stage Company, in residence at Gillette Castle State Park, East Haddam CT, contacted JSGH to share in the research on their upcoming production of her one-man drama on the life of Yukitaka Osaki titled Osaki-san, William Gillette’s Gentleman Valet.  The play is based on the life of Yukitaka Osaki, who was valet, confidante, secretary and friend to the famous Sherlock Holmes playwright and actor, William Gillette. She had received an artist’s grant from the CT Office of the Arts to produce the play, which would premiere at the park in September 2018. Ms. Carle told us that Yukitaka Osaki’s brother was Yukio Ozaki, the famous Japanese politician and one time Mayor of Tokyo, who facilitated the donation of 3000 Cherry trees to Washington DC in 1910. (Yes, the famous Washington D.C. Cherry Trees! The reason for the last name spelling difference is unclear).

Then a family member of Masamichi Hongoh, Mr. Kazuo Takebe, a retired high school principal in Yokohama Japan, heard about the plan and contacted the Gakudo (Yukio’s pen name) Foundation in Sagamihara, Kanagawa prefecture, Japan. To our excitement, Mr. Takao Ohashi, secretary of a not-for-profit associated with the foundation, told us that the 3rd generation of the Washington D.C. Cherry trees are actually grown in Sagamihara, the brother’s hometown! He was expecting to receive 100 young Yoshino Cherry trees early in 2019 from the contracted nursery there. However, Mr. Ohashi told JSGH that exporting Cherry trees from Japan to the US is difficult. Checking on the regulations, we found that in certain cases Cherry trees can be imported from Japan with permission from the USDA, and would include a period of quarantine.

JSGH has decided to go ahead with phase one of the project by purchasing additional Cherry trees from Northern Nurseries, West Suffield CT, and plant them around the pond at Gillette Castle State Park, as well as at Osaki’s house, at the bottom of the park, near the Chester-Hadlyme ferry. (Yukitaka Osaki was an avid gardener).

Phase two of the project will be carried out when the Cherry trees from Japan at Baltimore will be ready. Several of those trees will also be planted at Yukitaka’s gravesite, Cove Cemetery, Hadlyme CT.

The Cherry trees were delivered to Gillette Castle State Park on Wednesday October 1st, and the plantings were done on Saturday, October 3rd. Volunteers from the JSGH and EHSCO, along with site staff, planted at the pond onsite. 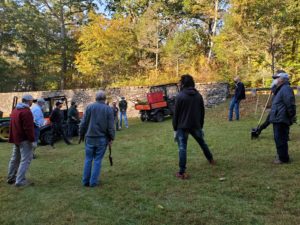 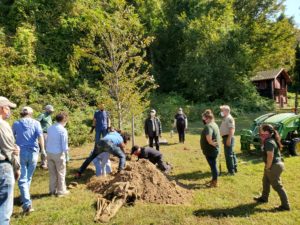 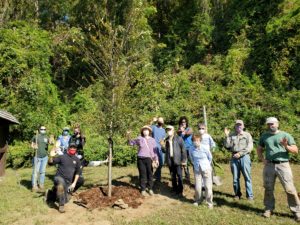 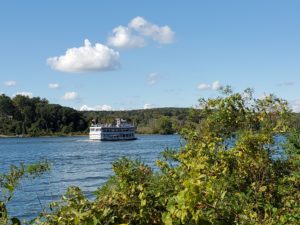 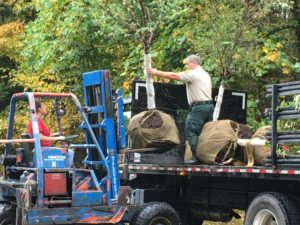 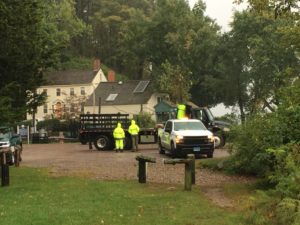 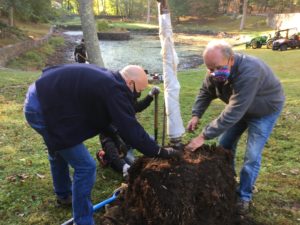 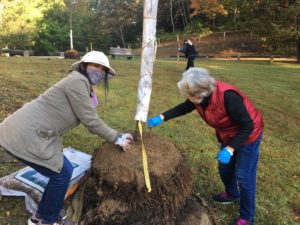 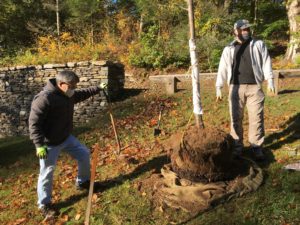 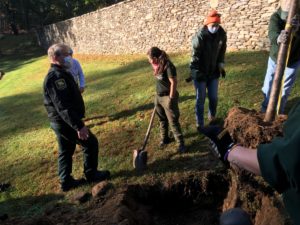 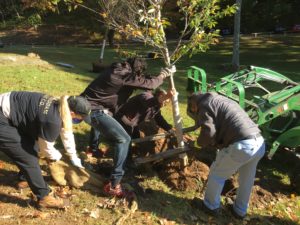 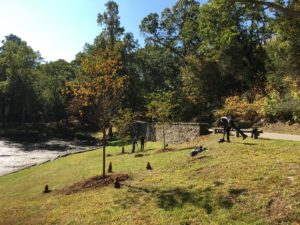